Bob Humphrey has only been a resident at St Agnes’ Hostel for a short time, since September 2019, but that didn’t stop him enjoying a wonderful 100th Birthday on 13 July.

Like many others celebrations during the COVID, Bob’s was broken down into a couple of smaller events to meet social distancing and other COVID requirements.

Bob was able to share a small family lunch at a private residence and later kicked up his heels at St Agnes’ Hostel ‘happy hour’ where he shared a ‘lemon squash’ or two with fellow residents, a beautiful cake and listened to a hearty rendition of Happy Birthday sung just for him.

Bob’s family was able to watch through a window as the residents joined Bob in reminiscing over a PowerPoint of his life that the family had created for this special occasion.

Born on the NSW Central Tablelands at Lithgow on 13 July 1920, Bob completed schooling and worked in business management. He joined the Air force during the war, became a Flight lieutenant and was injured in a plane crash during training. Even though he recovered, he was not allowed to go into operational duties, because his left leg remained weak.

Instead, Bob dedicated himself to his non-operational duties, which included making mock attacks on trainee bomber crews who practised their skills with cine guns.

“Flying was a pleasant experience – I really enjoyed flying by myself”, says Bob.

After the war he worked in the import/export industry for Brown and Dureau (now known as Amtrade) in Sydney and then for the East Asiatic Company and finally with a timber firm, called John Cook and Sons. A keen member of the Masonic lodge for nearly two-thirds of his life, Bob also enjoyed tennis and baseball but, after his retirement, golf and bowls were his main interests.

When he retired to Port Macquarie in 1980, he became involved in the local RAAF group and the Probus Club, enjoying regular lunch outings with both groups.

After Bob’s wife Phyllis died in 2003, he met and married Yvonne in 2004. Yvonne still lives in the St Agnes Village complex and visit’s Bob regularly. Bob and Yvonne together share three children and eight Grandchildren. Yvonne has 4 children and 16 grand children

Asked what advice he would you give to young people today Bob, wisely, says, “Just be nice to people and like people. Too many people these days are just not happy.”

Bob thanked everyone for their hospitality and joining him in the celebrations. 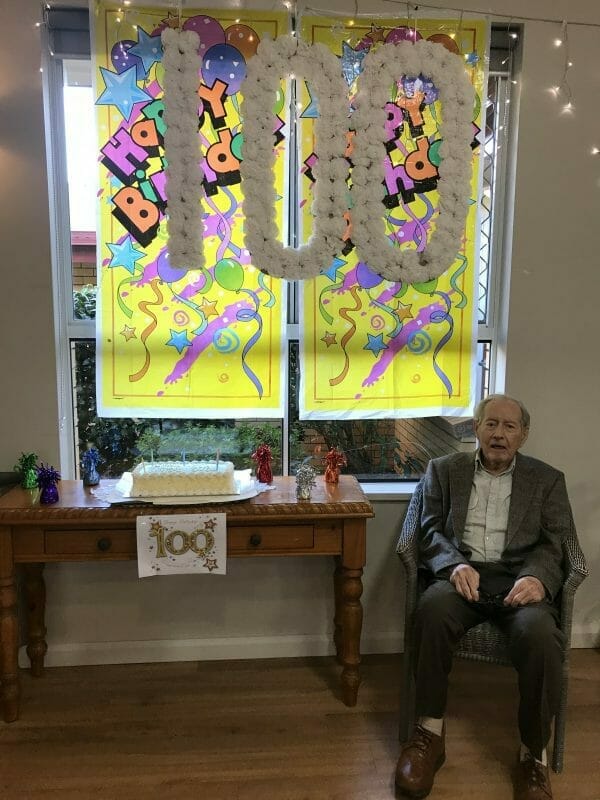